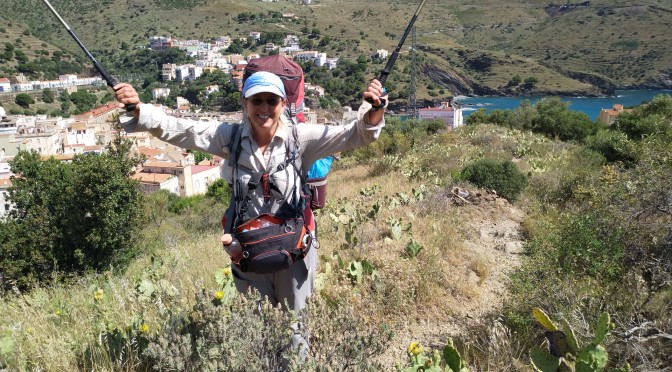 From June 15 – 22, I am doing a walking fundraiser for a Rutgers University journalism scholarship I co-founded to honor the memory of a classmate, work colleague, and friend.

Please consider joining me as we finish our walk the same way we started it with:  Finding and sharing kindness, one step at a time.

Five years ago in early June 2014, I got a message from my friend, Andy, “Jenn, call me back when you can. I have some bad news.”

Lluís and I were walking Catalonia’s GR 92 hiking trail as a training walk for the Bangkok-Barcelona journey.  We had made it to the town of Torroella de Montgrí, and had a rare night in fancy-by-our-standards hotel. I showered the sweat and dirt off my body, put my feet up on the desk, and called Andy in New Jersey, six hours behind me.

He told me that our friend, Sean Carr, died during what was supposed to be a routine operation. He was 43.

My jaw dropped, my heart skipped a beat, and my mind started to go in circles.

A couple years later, our paths crossed again at The Home News Tribune, the daily newspaper where we both worked as beat reporters covering central New Jersey towns.  Life eventually led us down different roads and to different publications, but we stayed in touch over the years (mostly with the help of social media), and had mutual friends, like Andy, who kept us posted about each other’s comings and goings. Occasionally, Sean and I had a chance to hang out and catch up on over a few beers. I last saw him in 2008. It is his sharp wit, big laugh and tenacity to ask the tough questions that I miss and still think about all these years later.

I didn’t sleep well after speaking with Andy.

The next day walking, my thoughts became reflective and nostalgic. I thought of Sean on the phone discussing budget issues with the mayor of the town he covered. I remembered some of the pointed political conversations we shared with other colleagues at the local watering hole on election night after our stories were filed. I replayed in my head the night Lluís and I spent with him and his wife Nicole near Washington D. C., the last time we met.

How fragile life is, I thought over and over again.  We must live each day fully, I promised myself. I walked on, my footsteps feeling as heavy as my heart felt.

A couple days later, I got another call. It was happy news this time. My nephew, Constantine, was born. I dove into the Mediterranean Sea, excitedly thinking about all the wonderful things waiting for life to show him, and the things I wanted to show him.

The rest of our training walk along the Catalonia coast had me jumping between the ideas about what life gives us, what life takes from us, how we create a way forward, and how we connect and disconnect from others as we move through life. What became clear is that I felt something should be done to honor Sean’s life. Though we weren’t super close, Sean’s touched mine. I wanted to remember Sean and many others who influenced my life. I wanted to be a good example to my nephew, showing him that we are all  part of a community and need to help each other along the way. I wanted to pay forward the goodness I have received throughout my life, and that I hoped we would find on a long walk across Asia and Europe.

When I got back to Barcelona, I spoke with Rutgers professor Steve Miller, the extraordinary man who is the glue between   Rutgers’ journalism alumni, about creating a scholarship fund in Sean’s memory. With the support of Nicole, Sean’s family, Steve, Sean’s good friends (Tim, Andy and several others), former classmates, and work colleagues, we created the Sean Carr Memorial Scholarship Fund.  There were several fundraisers between then and now, and, to date, we have awarded our fourth annual scholarship of $2,000  per year.

This week, I will be very close to the exact spot on the GR 92 where I learned about Sean’s passing. And, while I may be in the same physical spot where my thoughts once debated the fragility and vitality life brings to us between birth and death, I find myself at a different point of reflection.

With three years of walking done, I realize how full life is, how full my life is. It’s full because kindness, humility, frustration,
joy, vulnerability, courage, and gratitude have carried me to that place. It’s with those same qualities, both on my mind and in my heart, that, this week, I walk for Sean. I walk for the students who have already received scholarships, and for those I can help in the future, at least in a small way. I for nephew because I want his life to be full. And, I also walk for me, because I want to keep discovering how I to live my best life, with all of its fragility and vitality.

This week, I am donating $1 for each kilometer I walk, which should be between 100-140 kilometers. Will you join me in my walking fundraiser, match my donation, and help keep the wave of kindness that has fueled this journey from start to finish going?

Thanks for your kindness, and for being part of our journey.  As we always say and sincerely mean, we carry you in our hearts.

Here’s how you can make a donation.

By check, made out to:

*Note:  The Sean Carr Memorial Scholarship is a special, personal and long-term commitment close to my heart. The money donated from this walk-a-thon is separate from the contributions we have received during our walk and have distributed to organizations and non-profits in the countries we have passed through. In my mind, this is an extension of my recurring annual donation but happens to coincide with our walk.

UPDATE:  From June 15-22,  I counted approximately 163 kms walked, so that’s $163 being paid forward in memory of Sean, and with the hope of helping students find their way.