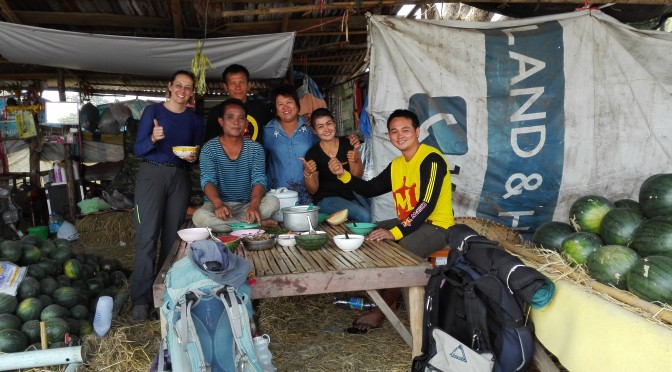 We all want the same things in life, regardless of where we come from or where we’re going. We want comfort, security, good health and a better life than our parents had.

There are other universal things we collectively seek out. For example, we want to belong. We want to fit into a family or a community, or said more simply, we have a human sense of belonging to each other that we spend our lifetimes trying to satisfy. The flip side of that is more complex. In the same way we individually crave to fit in and belong, we also have this tendency to want to help others belong to whatever circles we move in. Despite what the headline news tells us about fearing “those people,” whoever “those outsiders” are in any given moment in history, there’s a part of us that cannot resist the urge to extend a kind hand and open heart to another person.

Thailand has given us a chance to reflect on this dynamic.

We wrote a few weeks ago about why we wanted to start our journey in Bangkok. But, it’s much deeper than that. For each of us, this marks our third time in Thailand. And, after a few weeks of walking through the country’s lush green rural areas and chaotic cities, we are, every day, humbled by the Thai people’s warm smiles, their outpouring of generosity, their hospitality, their cultural idea of merit-making and their desire to make us feel welcome. It’s hard for us to believe this is a “make the tourists” happy scheme. It seems to be their nature to be genuinely nice.

The Thai version of nice

Like, the couple we met last week, whose names we’ll never know but whose smiles will always be part of us.

They are farmers, and, among other crops, harvest fields of corn. Their modest house is lined with sunflowers. They were steaming and selling ears of sweet corn alongside the two-lane 1084, the road we walked all last week. We stopped to stretch and sip water at the bus stop next to their table. The wife walked over with two cobs of corn, and few minutes later she brought over a few more. We offered her money and she laughed, waving her hand away as if we were being ridiculous.

We watched the husband husk the corn piled in the back of their well-used pick-up truck. We were making good time on our walk, and could afford to stay a while longer. So we went over to the pick-up truck and helped him prepare the next batch of corn. He smiled, and without understanding exactly why we would want to do that, he showed us, with his well-worked farmer hands, how to best pull away the leaves from the cobs. We exchanged the few words we knew in Thai and English, and with the help of another woman waiting for the bus, were able to explain that we were walking from Bangkok to Mae Sot and that, in gratitude for the corn, we wanted to help them in a small way since exchanging money seemed out of the question. The three of us worked side-by-side for 30 minutes or so, while the wife filled tiny baggies with salt and put the steamed corn in bigger plastic bags, readying them for the next passerby who would pull up via moped or car.

As we hoisted our backpacks, the husband gave us a plastic bag filled with more corn. He said something in Thai, which we assumed from his smile, the tone of his voice and our universal sign language for the basic essentials meant something like, “For your journey, to keep you strong.”

Then, there was the watermelon family (featured in the photo at the top of this post). We don’t know if they were family by blood, but they had a clear bond of friendship they extended to us. They called to us from across the road, “Come. Eat,” they said, and complimented the invitation with the downward waving hand motion Thais use express that they want you to come to them. We paused and thought about it. It was hot and getting hotter, and we still had many more kilometers to walk. But, sometimes, you have to say yes to what life offers and let everything else sort itself out.

We crossed the road, and they made room for us on the wooden platform they were sitting on. They pushed pots of vegetables and meat towards us, which we tried to say was too much, and one of the ladies filled up bowls of hot rice and minced pork porridge; it was delicious, and for sweaty and tired walkers, it proved to provide a much-needed energy boost. A young man passed us cups of cold water; we savored its coolness and hoped the water was potable and wouldn’t cause us stomach problems later (it was potable and we had no problems, thankfully). The older man picked up a medium size watermelon from the stacks of watermelons laying around the rudimentary shelter and shop that shaded the group, and sliced it in half with his machete. He stuck a soup spoon into each half and put it in front of us, smiling with a sense of pride that said “I’m glad you’re here. Eat, please.” He then found two smaller watermelons the size of grapefruits and sliced them up for us, too.

The seven of us talked the best we could. A few words of Thai from us, a few words of English from them, Google translate and sign language rounded out the chat. We told them we live in Europe, and we listened closely for clues about their nearby watermelon farm. They asked where we slept, seeing my hammock strapped to the bottom of my pack and Lluís’ camping mattress rolled on the top of his bag. We talked about the big camaflouge colored tent they set up in the back of the “shop,” which, if we understand right, the younger couple sleeps in. They wondered, like most people we meet, why we would walk through Thailand…wouldn’t it be easier to go by moped or bicycle, they signal with a rolling of their hands, which resembles a pedaling motion. In the hottest hours of the day, we admit to thinking that a bicycle would be a good alternative, but in these instances, we shrug our shoulders and say, “We like walking.”

It’s time to get back on the road. Again, money seems to be an unacceptable exchange for kindness. They slice another watermelon, bag it up and give it to us. “For your journey, to keep you strong” is the message. Their smiles says it all. Our smiles, as big as we could make them in the mid-day heat, we hope, show our appreciation and gratitude.

I could write all week about these golden moments. But, there are too many that have made an impression and a week wouldn’t be enough time. Lluis’ blog for this week, which will be posted later today, highlights a few more of these exchanges. Still, though, words fall short.

Some of you may scoff at this, dismissing it as kindness shown to “white, Western tourists.” And, my dad, a retired police officer with acute street smarts I hope to have inherited, while happy to hear we’re having a great (and safe) experience to date, reminded us to stay on guard. “Be careful of too nice,” he said. “Sometimes people who are too nice have the same intention as people who are not nice.”

There is truth in these sentiments. We recognize we start from a lucky place of privilege. We are white, Western tourists, and in many parts of the world that comes with something we may, for lack of a better word, call  respect or something that can be couched into the idea of opportunistic economic advantage. We don’t know, and we will never know with any certainty, if we would be treated the same way if we were refugees or migrant workers from neighboring countries who land in Thailand (or anywhere else, for that matter) looking for a better life and a new way to belong. Obviously, too, there is a shady side of Thailand – human trafficking and slavery, the sex industry, gang issues and who knows what else exist and show other sides of human nature. So far, we’ve had the good fortune of not experiencing first-hand those darker elements.

What we know is what we intuitively feel, and on a trip like this, our instincts tell us a lot more than our rational minds. We feel like we are being embraced, and we hope we can blanket others we meet along the way with this same sense of comfort and security.

Imagine what the world would look like if we all took morsels of the Thai version of nice and genuinely helped each other feel like we belong, even if it was only for a few brief minutes every day. Couldn’t we achieve more with goodness than with fear? How much does a sincere, heart-filled smile cost, and how could it, over the long run, change the way people see one another?

Perhaps the human quest to belong to each other, to feel appreciated and accepted, isn’t so far out of reach. Maybe we only need to wave to someone and invite them to sit and share a moment with us. If we said yes to that, would all the other things sort themselves out?

I guess we’ll find out.

We guesstimate that we covered about 127 kilometers last week, translating to about a half marathon distance every day on average (about 21 kilometers of 13 miles). Since leaving Bangkok on Jan. 16, we calculate that we walked approximately 420 kilometers with backpacks (we don’t keep GPS on during the hours we walk,  but we track distances with paper and digital maps), not including whatever kilometers we logged after we dumped our packs and headed out to explore the city we’re sleeping in (we often do another five or so kilometers walking get lunch or dinner,  stroll along a river and” talk” to locals in town).

5 thoughts on “A Sense of Belonging”