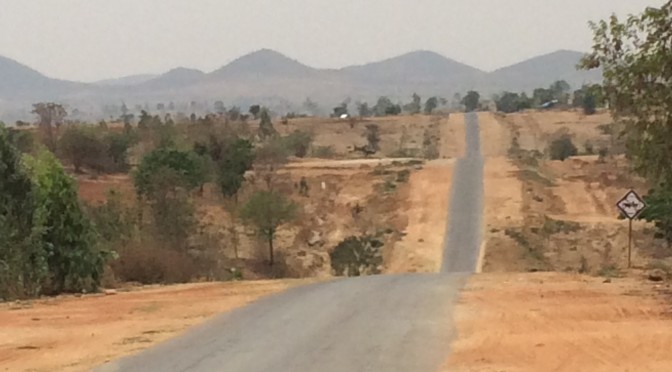 Thailand. Done. Burma/Myanmar. Done. If we were following a straight line, Bangladesh would be the next country on our walk. But, it won’t be.

Up next: Bishkek, Kyrgyzstan.

BIshkek??? Kyrgyzstan??? You correctly may be telling yourself, “Why are you going there? That’s not even marked on your map!”

No, it’s not part of our original plan, but we decided Bishkek appears to be the most likely spot to serve as our Central Asian hub during the next few months. As we head into a part of the world completely unknown to us, Bishkek, we hope, will become what Bangkok is for us in Southeast Asia – the place where we can get visas for neighboring countries, buy maps and plan the next stretch of our route, reboot and stock up on supplies. We have no idea if it will live up to this expectation, but we will leap and hope the net appears.*

The choice, too, has its roots in other practicalities. We may be fool-heartedly chasing down this dream called Bangkok to Barcelona On Foot, but we haven’t completely lost our senses.

First, we need (expensive) visas to enter both Tajikistan and Uzbekistan, and since Tajikistan does not have an embassy in Thailand, we had to come up with a better way to apply for and renew visas. A friend of friend, someone who has spent a lot of time in Central Asia, told us a few weeks before we flew out of Barcelona that Bishkek might be a good option for us. Kyrgyzstan offers visas on arrival when you fly in, and all of its neighboring countries have embassies in its capital city.

Second, we are melting in Southeast Asia. Temperatures along the roads we’ve been walking are frequently creeping up and over 40 degrees Celsius (about 110 degrees Fahrenheit). People tell us it will keep getting hotter through May and maybe June when monsoon season starts. The heat, though a dry one often without much humidity, is exhausting and dangerous. It’s a foolish and risky endeavor to force our bodies to adapt to such extreme heat and then struggle through potential flash flooding or whatever else the rains will bring. Instead, we’ll save Bangladesh and India for the fall and winter months, when the rain stops, possible flood waters recede and temperatures drop to something more suitable for walking. Of course, that means we will have to deal with potential post-rainy-season mosquito problems, but mosquitoes are something we have to deal with almost everywhere all the time in this part of the world.

Third, we cannot plan to be in these landlocked Central Asian countries in the winter for the opposite reason. It will be dangerously cold with sub-zero temperatures and heavy snow in mountainous terrain. So we’ll walk them in the spring and early summer, the months with the best weather. We are expecting regional daytime temperatures to stay in the low to mid 20s (high 70s in Fahrenheit) for the next few weeks, dropping to single-digits or the low-teens overnight. We’ll see what happens in July and August when we again could well be living with +40-degree heat.

And, lastly, we know life rarely moves us in straight lines from Point A to Point B. Things like weather, border-crossing requirements and changing geopolitical situations mean we have to take detours and look for alternative (and hopefully scenic) routes that keep us safe, strong, motivated and never too far from water and food sources. It’s very simple–there will gaps in our trip, something Lluís refers to as “the holes in our cheese.” We will be disappointed when we hit these gaps because we would like to walk as much of our proposed route as consistently as possible. But when we can’t, we can’t. Life will continue to move us forward in another invented way.

Burma was our first taste of that. As we already mentioned, we knew we would not be walking the entire length of the country from border to border. Besides the visa limits restricting how many days we can be in-country, the unbearable heat, the anticipated arrival of rainy season and the lack of a legal, open border with Bangladesh, Burma still has its share of ethnic conflicts and warring factions in some regions. In fact, we saw a significant amount of troops, military cargo and tanks moving northbound over several days. We are not naive enough to believe they were going from base to base without reason or that they were meant to safeguard crowds during the recent New Year (Thingyan)/water festival celebrations. There is still reported fighting, sometimes heavy armed fighting, in several areas in the northeastern and northwestern parts of the country, and obviously we do not want to be caught in the crossfire nor would we even be allowed to enter those areas. We are grateful that we were able to safely walk as much as we did in Burma, an estimated 880 kilometers, and got to experience the country at a pivotal time in its history. Just a few years ago, we would not have been allowed to visit there, and until we got to Mae Sot, Thailand in mid-February, we were not even sure if we could walk beyond the border.

So off we go into part of the world that will be completely new to us. We find comfort in knowing that travelers have crossed these lands for centuries, using Central Asian spice and silk trade routes to bridge communities and cultures. We hope our footsteps continue to add to that collective connectiveness.

*As is the case with every new country we enter, we don’t know what the “Stans” will look like in terms of electricity reliability, Internet access or phone networking. We’ll post when we can, but there may be long stretches of silence. Assume we are okay and simply unconnected. Thanks for understanding and for following along.