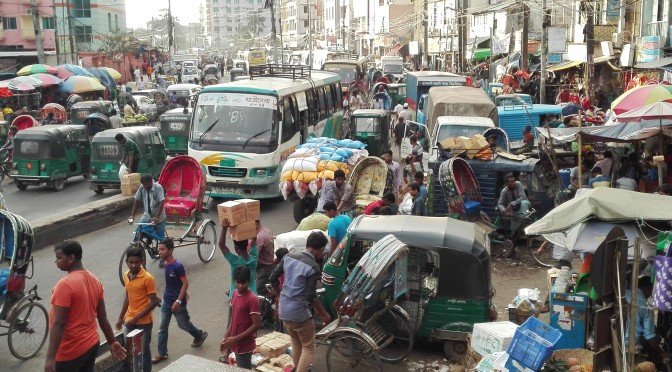 We notice a lot of things when walking the world.

As similar as we all are, we do things differently, either because of customs, cultures or habits.

Here are a few of the curious things we discovered in Bangladesh, in random order. (Lluís does a much better job remembering and noting all these little things. Check out his post in Catalan, published the same day as this one; you can use Google translate to get the gist.)

Heart-touching. People in Bangladesh, like those in other Muslim countries, touch their heart with their right hand after greeting you, shaking hands or saying thank you. We love that gesture and have adopted as our own.

A left-hand crossover. When people bring us food, give us something or return change for payment, they offer the item with their right hand. While doing that, their left hand crosses over to touch their right forearm or wrist area.

One-off cigarettes. There are not many smokers in Bangladesh, but we see people buying cigarettes one or two at a time instead of a whole pack.

Betelnut chewing. Like in Burma, betelnut is common here, too. But they seem to prepare it in a slightly different way, and don’t spit and stain the street the same way as their neighbors across the border. However, their teeth have the same scary blood red effect.

The universal sign for woman. When people want to know if we’re married or ask Lluís if I’m his woman, they point to their nose. Married Bangladeshi woman pierce their noses, and pointing to their nose is their way of gesturing woman. Curiously, in Central Asia, the universal symbol men used to say woman was stroking their eyebrows.

Crazy honking, insane drivers and unbearable traffic jams. I thought India was insane with its aggressive driving and constant noise-making…that was until we spent two months in Bangladesh. It is the noisiest place we have walked so far (and now that I write this from India, I can say Bangladesh is worse than the 300 kilometers we have covered so far in India). Drivers pretty much keep their fingers on the horn all day long, and become even more “enthusiastic” in their honking when swerve all over the road to pass and force everyone out of their way.  This was, hands down, one of the worst aspects of Bangladesh. (Lluís wrote about this a few weeks ago.) And don’t me started on the traffic and the superhuman skills we needed to maneuver through Bangladesh’s city streets. ugh!!

The gather-around effect. Within 10 seconds of stopping, a dozen or more people typically gather around us. There are people everywhere!! They usually just stare at us in surprise, sometimes they talk to us, many times they have big smiles on their faces and mostly they try to figure out my trolley contraption.

The four questions. Nearly everyone in Bangladesh asked us the same set of questions, dozens of times a day. They were: Country? Married? Children? Muslim?

The absence of women. Almost everywhere we looked, we saw men. Women are out walking in the street now and again, and we saw them once in a while at bus stands and train stations and in markets, but there were very few women working in any of the places we slept, ate, shopped, viisted or passed. Ironically, though, we saw many, many girls and young women going to school and university. We hope that is a sign of changing times and encouraging skill development for the future workforce.

Warmth and kindness. We were warned about Bangladesh, and told it was not a safe time to be there. But there we went, and our experience was like everywhere else. Most people in the world are trying to get by, finding ways to feed and shelter themselves and their families. In the world and in Bangladesh, people are generally good, hard-workers, and quick with a smile when two strange foreigners walk by. Several people and families took us in and showed us simple kindnesses, like giving us water, buying us a tea, and letting us stay overnight in their homes.

Sweeping but not really cleaning. Throughout Asia, we keep finding people bent over at 90 degrees sweeping the fronts of their houses and businesses with brooms about a half meter long. Very few add a stick to the broom, which would help them stand up straight when sweeping. But, even if they did, we’re not sure about their technique. They basically sweep their dust and dirt to the road in front of them. We never see a dustpan to pick up the dirt, and with all the traffic going by, we’re pretty sure the space they just swept would be dirty again in 10 minutes.

Green landscapes and piles of garbage. We were in Bangladesh after the monsoon season, so all the fields (most of them were filled with rice) were brilliant shades of green. We were lucky enough, too, to walk on several roads with beautiful trees shading us (although, sadly, we saw many lumber mills and downed tress along the roads). While the roadsides were less littered than Burma, the piles of decaying garbage on the edge of towns and throughout cities is deplorable. Worse, shop owners and residents will tell us to throw our trash on the street, like everyone else. We never do… we carry garbage with us for kilometers until we find a trash bin; obviously, though, we suspect our effort is totally negated and it ends up with all the trash, half-burned somewhere. 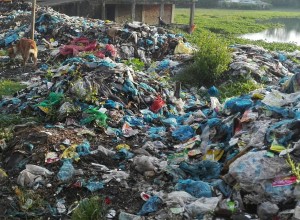 Using your head as a daypack. We’re always fascinated by what people all over Asia carry on their heads. It’s the way they carry fruits and vegetables, sands, gravel, water and whatever needs hauling.

Getting a ride. Buses are everywhere on Bangladesh’s roads. We think they outnumber trucks, and they may be as plentiful as motorized tuk-tuks and bike rickshaws, the other main forms of transportation we see. There are very few private cars, motos or personal bicycles.

Population control. In a small country packed with more than 160 million people, we’re glad to see steps that encourage and empower women and families to control the number of offspring they produce. The lack of jobs, resources, economic opportunities and quality of life for large-sized families are limited here. In a few of the big cities, we saw huge billboards advertising birth control pills, something we applaud.

Prices are marked. Prices are printed in Bengali and sometimes in Latin letters on most products you buy in shops. Soda, water, bread, cookies, soap and many other types of packaged goods have the lot, expiration date and price clearly marked. We learned how to say and spot Bengali numbers from 1-10, making it easier for us to buy everyday items.

No utensils. This is an eat-with-your-hand culture. They use their right hand to scop up rice, vegetables, meat and whatever is on their plates. Most places, including the most basic eateries, will have a sink or a wash basin, usually with some sliver of soap, where customers can wash their hands and face and rinse their mouths before and after eating. We tried to perfect this eating technique, but failed; restaurant staff was usually quick in finding us a spoon.