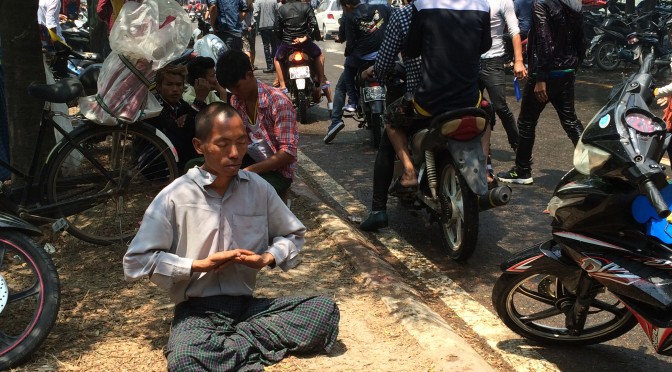 What makes travel fun is noticing the quirky things that are unique or special to a place. Walking makes those things appear in slow motion and gives us more time to mull them over.

Here are a few of the curiosities we spotted in Burma, a series we started in Thailand and hope to continue with each country we pass through. Lluís and I often spot different things, so read/translate his list to chuckle twice as much (His post about Burma will be posted the same day as this one, and here is take on Thailand).

Water. There are several water-related curiosities so I’m dedicating a chunk of space to this category. We happened to be in Burma during dry season when much of the landscape, especially in north-central places such as Bagan and Mandalay were bone dry and desert-like. Still, water was in relatively ample supply in many places, including:

Tea. Since we are always thirsty in Burma’s +40 degree summer weather, staying hydrated and downing liquids is important. Luckily, besides finding frequent water jugs or buying one-liters for the standard countrywide price of 300 (now and again 400) kyats, about 25 US cents, we drank a lot of tea. Thermoses of hot tea and little tea cups (again ignore the fact that you never know when they were last used or washed) are on every table in nearly every restaurant. And, it’s free! Help yourself to however much you want. It’s hotter than hell and will make you sweat more, but every little bit helps.

Nail painting. Although nail painting is more of big-town thing for fancy occasions like weddings and not something I saw much in rural areas, the few times I saw it was consistently one-handed. Ladies only paint the fingernails of their left hand. The consistent answer I got from the multiple women I asked in different towns was that the right hand was their working and eating hand, and my take on the translation was that they wouldn’t want to chip the polish on their working/eating hand.

Skirts. Men and women here wear skirts down to their ankles. Women’s skirts are more colorful and decorative, and men’s longyis are usually a plaid pattern. Women either do a wrap and tuck tie, or tie a knot hip level; in grab the two corners of the one-size-fits-all, cylinder-tube cloth and tie a knot below their belly buttons.

Steering wheels and driving distances. Burmese drive on the right, like in the U.S. and Europe; Thais drive on the left like Brits. But, steering wheels here have not yet been standardized. Cars and trucks either have steering wheels on the right side of the vehicle or on the left side; both are common. When you ask people about distances, they usually answer in miles but the road markers we spotted along the way are marked in kilometers. I suppose they are moving gradually to the universally-accepted metric system.

Religious conservatism meets urban punk. Often in the early morning hours we hear Buddhist chanting. But it’s not always from monks in temples. Frequently, people turn up the volume of the morning Buddha TV program so the whole block can hear it. This is not too surprising in a country where we see pagodas everywhere. There is, however, a youth rebellion brewing. Many young people dye their dark hair red, pink, blonde or green and they sport hairdos that famous soccer players wear. Their arms, backs and chests are colored with tattoos, something the boys seem really into and that the girls are slowly following along with. Our strangest encounter was seeing these two worlds converge. During the last day of water festival in Mawlamyine, the last city we visited, about 20 or so soaking wet, goth-punk, tattooed kids wearing black studded jackets and black jeans, their faces smeared with black and white cream like extras in the movie Crow, bring their motorcycles and mopeds to a screeching halt in front of the street shrine we happen to be sitting near. Many of them get off their bikes, bow in front of the shrine, say a few prayers and then get up and light a cigarette. They hop on their bikes and continue their party mode, revving their engines and whistling as they pull away.

Burma, you’ve certainly made an impression on us. We’ll be wondering where life takes you next as the world around you rapidly changes.

One thought on “Curiosities From…Burma”