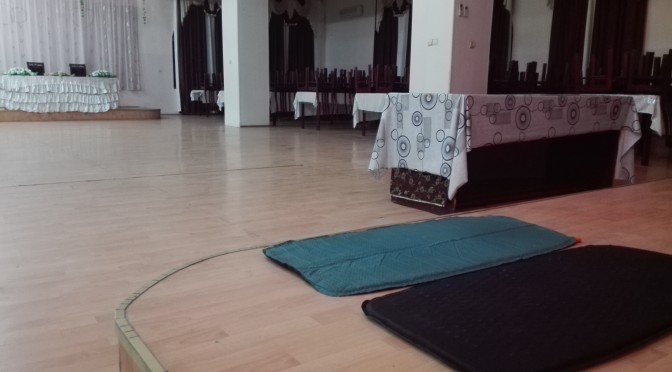 Azerbaijan was good to us, for the most part.

We were offered tea many times along the way, and sometimes that came with the extra bonus of candy, bread, cheese, fruit and nuts. People bought us grapes, corn on the cob, a plate of food, beer and kebabs.

But unlike in Iran, where we were spoiled beyond belief for three months and where people jumped out of their cars to warmly welcome us to their country and into their homes, Azerbaijanis took on a more serious stance, at least initially. Their invitations frequently came with a former Soviet-style coldness and without smiles; softness and compassion swept over their faces only after understanding the extent of our long walking journey and examining our maps (older people educated in Soviet classrooms have a strong sense of geography and always ask to see our “kartas,” the Russian word for maps).

This interpersonal distance, along with getting to know a new culture and adapting to different social behaviors over a short period of only 3.5 weeks, followed us into the evenings, and we had a mixed experiences with our daily nests, or resting places.

Other nights were strange.

A few nights, we slept in separate places. When the temperature reached 44-45 Celsius (about 110 Farhenheit), I couldn’t handle walking anymore. I felt on the verge of heat exhaustion, or worse. I took a van about 180 kilometers away to the next big town with a hotel, waited out the heat in a slightly air conditioned room. Lluís stayed on the road for a few more days, braving the heat, destroying his feet on awful gravel and rolling rocks of a half-built road, and camping wherever he finished the day.

Many nights, we camped in fields adjacent to the main road or in makeshift shelters used by farmers.

We had a couple “luxurious” nights in hotels and guesthouses, places where we enjoyed good beds and showers.

Thank you, Azerbaijan! We weren’t there long enough to really get to know you, but we’re glad we passed through your land and shared tea with some of your people. We’ll brush up our backgammon skills and maybe see you again, but definitely never again in August!