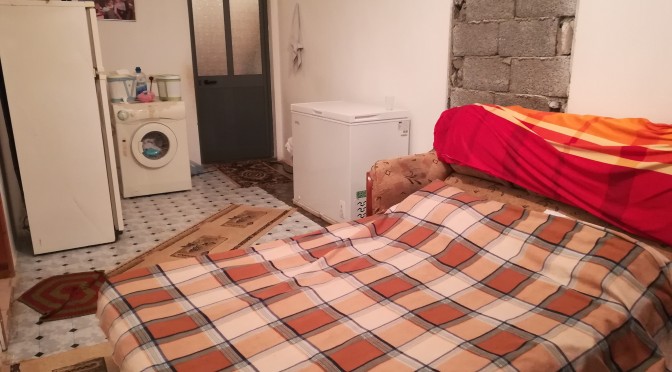 Now that summer heat has passed and the sun is no longer melting my brain, I can recall our Albanian nights in a better state of mind, and with the sweetness they deserve.

Albanians  were among the nicest people we have met on our +2.5-year walking journey.

Their kindness and hospitality made our short 200-kilometer-ish walk there so special, and  the nights and conversations we had in their company will be long remembered.

These pictures reflect that. You may see only sofas and living rooms; we see hours of  friendship we were so fortunate to experience.

Here are some of the back stories. 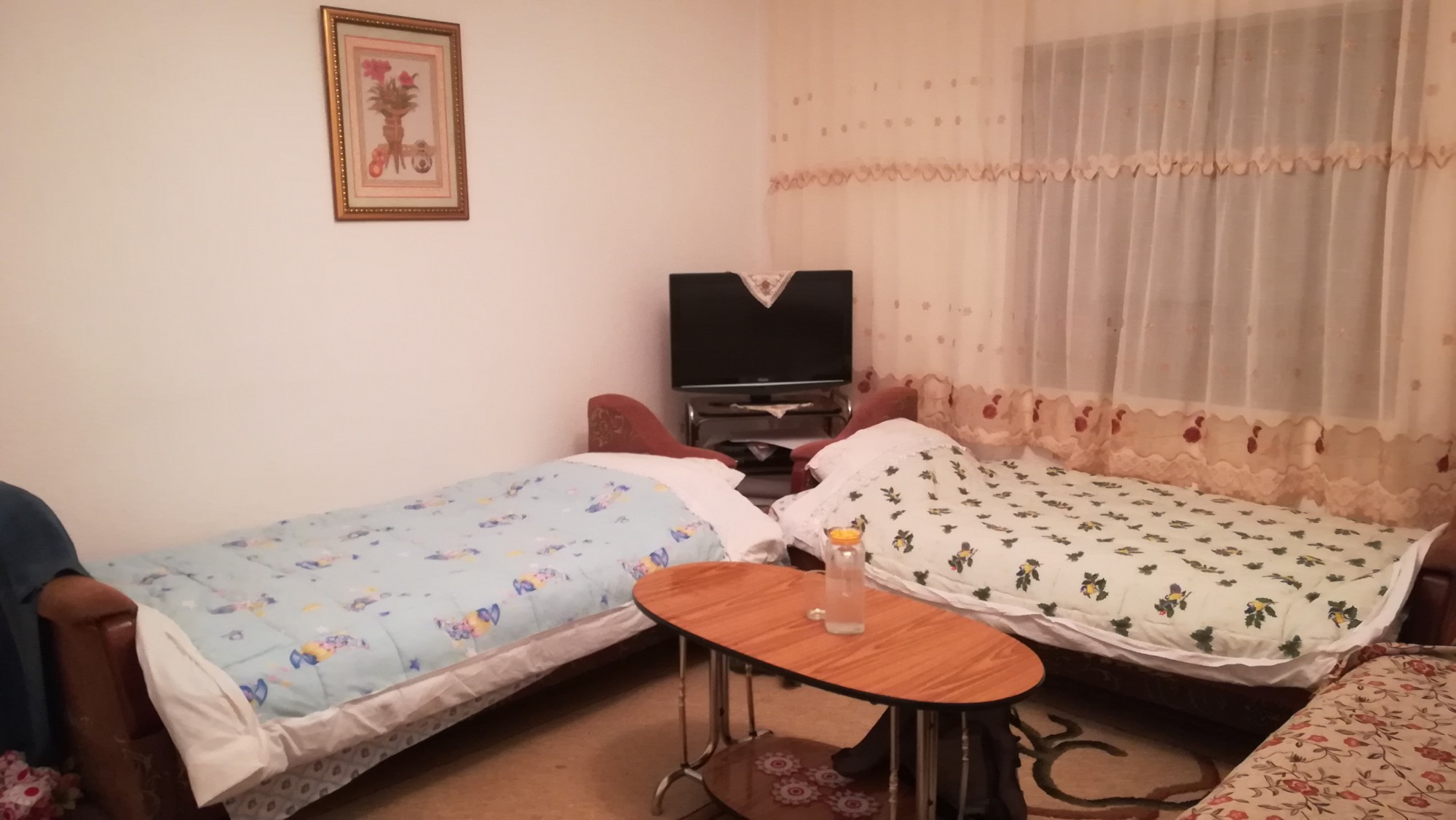 Our first night in Albania set the stage, and help put Albanians to top of our “kind people” list.

As we were walking along, we saw a man and his teenage daughters and son moving hay into a barn along the road.

The man, who was about our age, began to speak to Lluís in Italian. He knew we probably wouldn’t be able to speak Albanian, so he tried his second language, Italian, which he learned from working in Italy for many years. This happens to us often along the way  — people speak to us in the language of the country they migrated to or the language they think is more universal. Some Turkish and Greeks spoke to us in German; people in old silk road countries and former Soviet nations in Central Asian addressed us in Russian, and in Albania, Italian was common among older people and English was the choice for younger people.

He asked us the common questions, like where we were from, why we are walking and where we are going. We invented Italian, using Catalan, French and Spanish as the Latin base to build on.  We all seemed to understand each other.

Within a few minutes, we were being invited in for a coffee, which turned into lunch, and more coffee and fresh milk from their cow, and an invitation to spend the night on their couches. We get these invitations more often than we ever expected and they surprise us every time. We are always shocked how easily people trust us enough to give us shelter in their homes.

We spent the afternoon chatting in Italian, English and a few words of Albanian. We ran a few laps around the cut wheat field with the teenagers and did some yoga stretching at sunset.

There was meat and potatoes dinner and warm just boiled milk with honey, more laughing and friendship sharing, and a very good rest in the living room.

A similar invitation came a few days later, but much earlier in the day.

At 9 a.m. only a few kilometers into the day’s walk, when we were taking a short break on a log near the road, a guy taking his cows out to pasture, invited us to coffee. His house was just behind us, and he called out to his wife.

After coffee, their 10-year-old daughter, who spoke excellent English, told us we could sleep in their house. “We have had cyclists here before. It’s no problem, really. We would love if you stayed,” she said with excitement. “No money. Free.”

We took them up on the offer… meeting people along the way is one of the most important parts of our walk. The invitation was too kind to pass up.

We watched the grandfather distill rakija, boiling off the liquid from fermented fruit in big old-fashioned pots. The girl and her sister taught us Albanian card games, which we played for hours, while their younger brother pretended to be Superman jumping off the porch. Later, the girl turned on YouTube to watch Bollywood videos and showed us her dance moves.

We helped herd their goats and offered to help prepare the homemade bread that was being for dinner. We ended up washing dishes, and insisted on doing that.

The pullout bed in the hallway near the fridge and washing machine was the best place we could have been in that moment. (The feature photo for this blog) 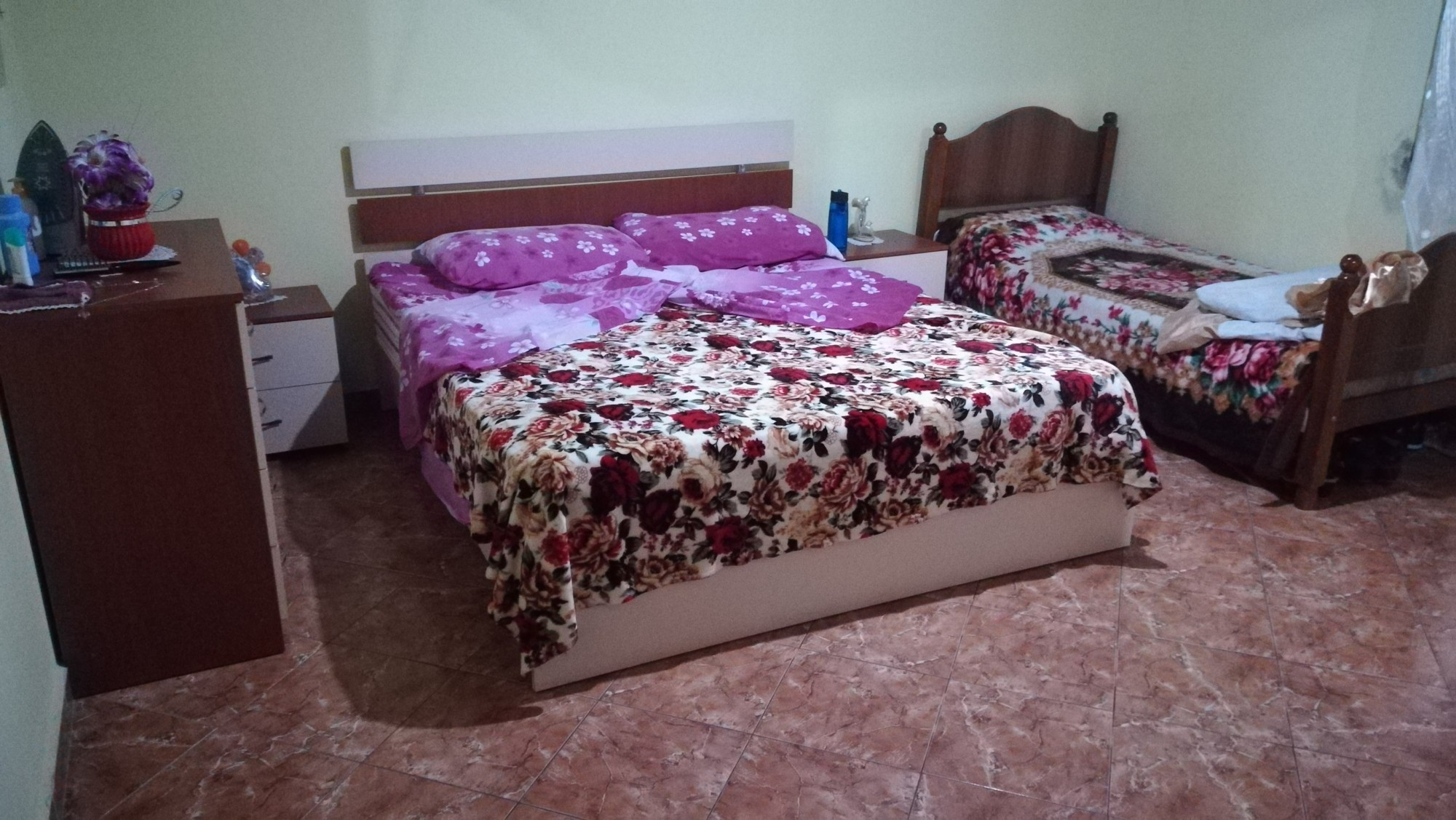 Another day, looking for a spot of shade on a very hot, sunny afternoon, we propped ourselves under a tree. The dog locked  behind the fence barked incessantly, trying to chase us away.

The woman of the house came out to see what the racket was, and saw us pathetically wiping sweat from our brow.

After we explained we were walking from Thailand to Catalonia and needed a few minutes of rest, another invitation for coffee came. We walked into their patio, met her husband and sat down for a coffee which came with a shot glass of  rakija, and plates of salad, cheese and bread. They told us we could take a nap in their backyard and we did.

Later they said we could stay in their extra bedroom, one reserved for when their kids and grandkids come over. We accepted but insisted on helping them in some way. They were a retired couple, and accepted our help in herding the goats and raking the hay into piles.

We helped chop vegetables for dinner, washed the dishes and do other small tasks around the house before collapsing on the bed. 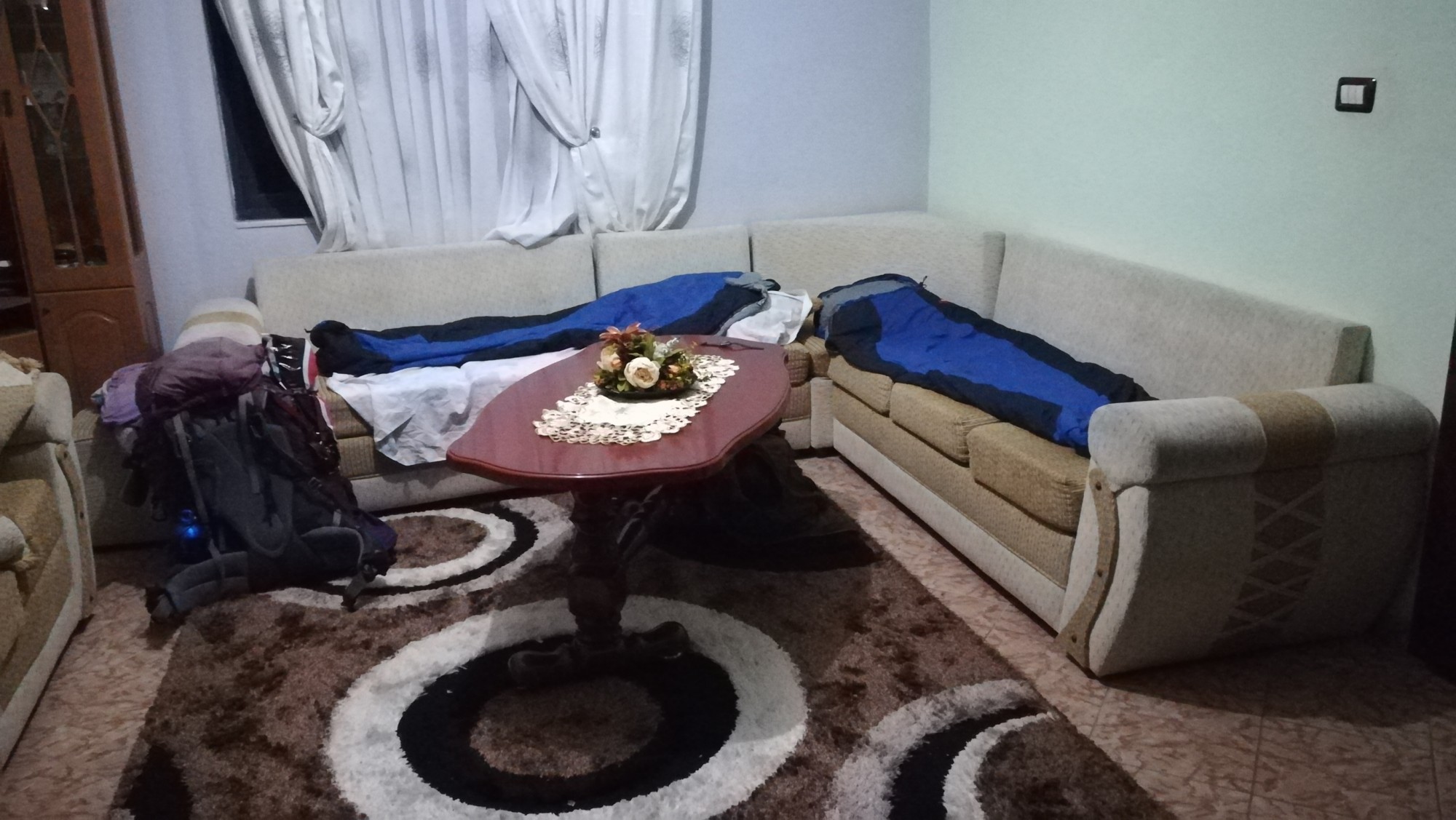 Another night, we thought we were going to camp behind a field where baby corn stalks were popping out of the ground. The trees after the fields looked like a good option. We walked alongside the edge of the field just as the sun dropped behind the horizon.

As we scouted a spot for our tent, a man showed up at the edge of the property. “Can I help you?” he asked.  “We’re walking Albania, and need a place to put our tent tonight,” we replied.

“No tent. You sleep inside,” he said in broken English, waving us through his gate.

We followed him up to the porch, and met his elderly parents who were corralling the cows, sheep and goats into the barn. They were happy to see us, and quickly got out the coffee cups and rakija shot glasses.

Then came the soup bowls for the stew, and slices of homemade bread. There was, of course, boiled milk from their cows, which we sipped as the man who invited us in showed us family pictures on his phone.

We curled into our  sleeping bags (hoping to save them water from washing extra sheets), and  as we do every night, we thanked everyone, including this family, who has helped us get this far in our journey. 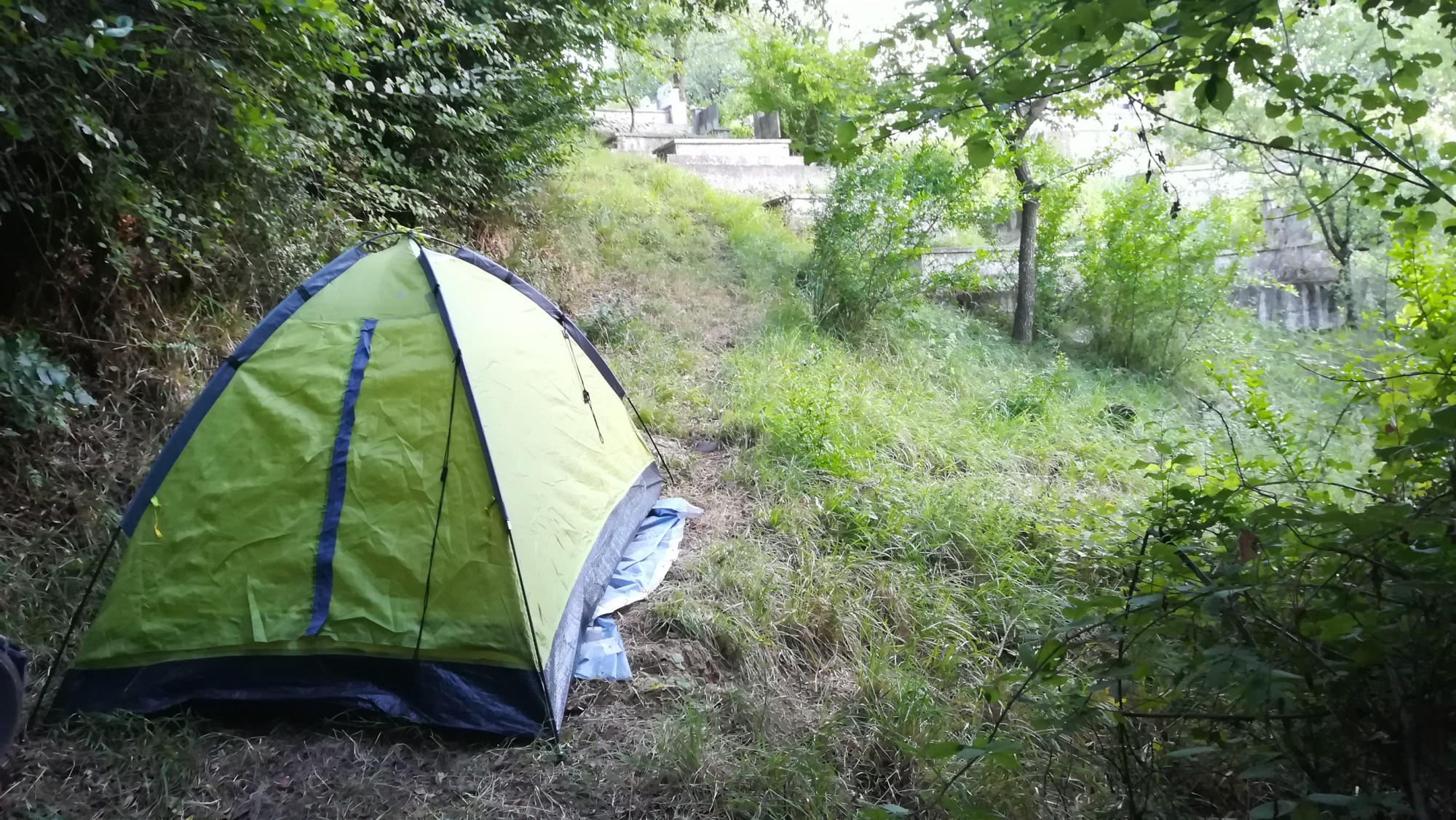 In Albania, with all the “sleep inside” invitations we were lucky to get, we only used our tent a couple of nights.

On this night, we arrived to a town around sunset, and spent quite a bit of time trying to find a place to camp. The road was lined with one house after another and an irrigation canal. We had to leave the main road and, literally, headed for the hills.

Finally we found a spot big enough to squeeze in our tent. We ended up on a slight slope a few meters away from an old, overgrown cemetery. We had to rush into the tent before the squadron of mosquitos attacked us.

It was a hot, sweaty night in the tent, but we were safe, and, come the morning, that’s all that really matters.