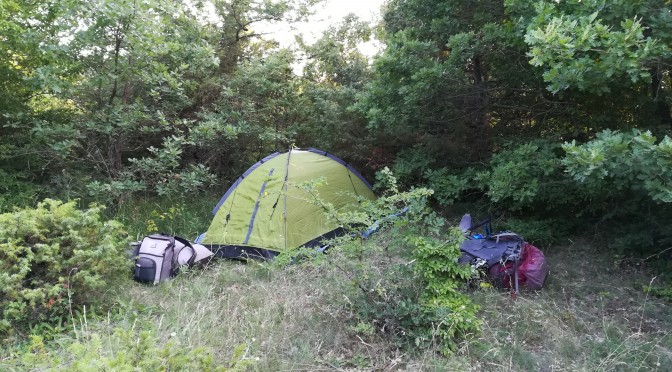 Our foot journey keeps inviting us to experience the world in a unique different way. Every night proves this to be true, and our three weeks in Macedonia added more gems to our treasure chest of sweet memories.

We started the Balkan leg of our walk in Macedonia, a small country of about 2.1 million people with a picturesque landscape marked by mountains, forests, rivers and lakes.

Its green, rugged beauty offers an invitation to camp, and that’s what we did very often.

The pleasant sound of crickets and frogs induced a relaxing sleep off a marked hiking trail in  Galičica National Park, the feature photo of this blog.

Other animals camped with us, too.  One night we pitched a tent at the foot of the entrance to Pelister National Park, and had to dash inside our portable home to avoid the onslaught of the fighting mosquito brigade (this is a common summer occurrence throughout most of the Balkans).

And, then there was the time when a young puppy, who I secretly named Cody2  because he reminded me of my dear friend Vivian’s dog, Cody  joined us in our campsite between the road and a cornfield; looking for love, company, and, of course, food, he walked with us about 20 kilometers one day and another 10 the next morning. Cody2 found a cozy spot in the tall grass behind our tent. We were sad to leave him behind, but we couldn’t take him with us.

But, as in every country, it was our time with locals that made our nights even more special, and we were lucky to have a few great experiences in Macedonia.

Our favorites nights in Macedonia, oddly enough, were the ones we spent volunteering at a drug rehab facility.

We literally fell into this place, desperately searching for shade. We didn’t read the sign out front or make the connection right away that it was a rehab facility. We beelined for the gazebo near a pond; we thought it was some sort of tourist spa in the countryside and hoped the staff would let us rest for a while. The people hanging out around the gazebo brought us cold drinks and plates of chicken and potatoes. They told us we could take a shower.  As they explained the “program” and “student life,” things slowly clicked in our melted brains…these very kind people were people reclaiming their lives and putting their drug use behind them.

Without hesitation or doubt, we asked the director if we could help in some small way. She thought about it for a few minutes, and came back with a yes. For the next couple days, Lluís pulled weeds and cut grass. I helped clean out the basement and helped the cook in the kitchen. During the breaks, we chatted with the students and the staff, and applauded their courage for facing their demons and starting a new chapter of their lives, hopefully, drug-free. We drank coffee together, played volleyball and watched some of the World Cup. We are incredibly grateful to have been allowed to stay here.

Another night, we ended up in a front room at Lazlo’s house.

While we were walking towards one of the villages, we met a guy walking the other direction. After being astounded by our cross-continental walk, he told us that his friend had an extra room we could stay in for free. He called him on his old-style flip-phone and arranged our stay.

A few hours later when we arrived to the village, we asked one of the neighbors where we could find Lazlo. “He’s coming now. I hear his tractor coming up the road,” the neighbor told us.

Lazlo waved us towards his house, and we followed his tractor dust. He filled up a bowl of peanuts, fried us fish he caught that morning in the river, gave us beer, and made us a salad. We watched music videos, a popular and recurring past time in these parts, it seems. He told his wife past away a few months back and that one of his kids lived in the U.S. We could feel his loneliness, and hope we were good company for him for a few hours.

Note: Apologies this is a bit of a short post. We have had limited connectivity and places to charge our phones during these last few weeks. I’m playing catch up, but the summer heat saps my motivation to write longer posts.

2 backpackers walking from Asia to Europe