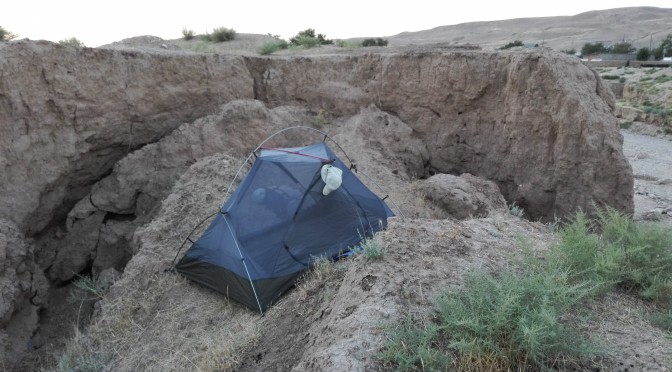 July’s walk through Uzbekistan found us sleeping in strange spots, like most months of our trip.

Because of the way Uzbekistan is set up politically, we spent many nights in tourist-sanctioned hotels so we could collect (un)necessary registration slips we had to show border patrol police when we stamped out of the country.

Ensuring that we had enough of these silly pieces of paper was a major stress during our monthlong visit. The word among cyclists and other travelers is that we need a hotel slip every three nights, something that became increasingly difficult for us. The stretches between towns with hotels were sometimes difficult to walk to in three days.

And, if we didn’t have a slip dated within three days, some hotels turned us away, citing the problems they would have with police if they couldn’t tell the Office of Visas and Registration (OVIR) where we came from.

This turned into a big headache for us in Qarshi, a less-touristic, provincial capital town. We went to four hotels before we were “allowed” to stay somewhere, and we think the only reason we were “accepted” by the fourth place was because they recently opened and may not have known about or faced the same OVIR tourist registration process.

The three others we stumbled into during our exhausting late afternoon search for a hotel made us pull out our previous registration slips. When they saw we had five days without one, they basically stopped talking to us and said we could not sleep there. One clerk at the front desk called “someone,” his boss, we assumed, to check if we could stay; after 45 minutes of waiting for a response without any sign that we were going to be green-lighted, we walked out of the hotel aggravated and, again, left with the feeling of wanting to get out of the country.

At some point during the series of rejections, we thought we should stroll into the Qarshi police station and register directly with them, explaining how we are walking Uzbekistan. We let that idea die on the vine. Going to the police in some countries is not always the best option. Besides opening up the possibility for bribe requests,  it will likely require far too many explanations. Our motto is the less we have to explain, the better off we are.

Here are a few of the hotels where we put our feet up.

Another downside of all this hotel stuff is that there are different prices for locals and tourists, which is not unique to Uzbekistan; it happens in a lot of countries we have visited (Burma comes to mind). They don’t seem to care that the prices are not at all competitive for the region they are in, and they think tourists, especially budget-conscious backpackers, should want to pay $35-$55 a night, for a two, maybe three, star place. We think that they think they are competing with Europe, when really they are competing with Tajikistan, India and Southeast Asia.

Thankfully, because it was July (and who visits a desert country in July??? Only a few people, evidently), we paid a hugely discounted fraction of the rack rate, and stayed on the cheap, for prices closer to what locals pay about $8-$10 each. Being on a multi-year trip compels us to watch our pennies where we can and stay on budget.

In addition to the non-competitive rates, we also heard that hotels have to pay OVIR (or some other government office) $2 U.S. per foreigner for every night they stay in a hotel for the duration of their Uzbekistan visit. This “tax” used be imposed only on the first night of a foreigner’s stay at the first hotel he/she stayed in, meaning the government only earned $2 per foreigner.

But, the government, obviously, saw a money-making opportunity worth taking advantage of, and changed the rule to work better in their favor. Ka-ching. That’s the sound of soms going into the pocket of someone with every slip of paper handed out by a hotel. For walkers and cyclists seeking out slips every three days, that means about $20 per person over a 30-day stay; and $60 per tourist if he or she stays in a hotel every night for a month.

Knowing this doesn’t make this slip-collection process easier. We knew we would need slips showing at least 10 hotel nights during our monthlong visit. What we didn’t know was how strictly this would be enforced and what the outcome would be if we didn’t have enough handwritten note cards. The power to interpret the rule lies in the hands of the individual holding the exit stamp and stamp pad.

We heard mixed stories from other folks. Sometimes the cops were super sticklers counting every day’s slips and wanting to know where they slept every night. Other travelers said the border cops barely checked their documents and waved them through without a second glance. Two walkers we met in Tajikistan who had come from Uzbekistan said they had no problem, and they had just barely enough papers; they said the cops were understanding when they explained they walked across the country and knew sleeping in a hotel every night was almost impossible.

At the border, we mixed up the order of the slips, putting our longer stays in very touristic places more obviously in front of the pile. We left the others in random order, hoping it would be distracting enough that the border police wouldn’t count all the days and would overlook the week or two where went longer than three days without a piece of paper. It worked for us. The border cop glanced at our slips and seemed satisfied that we had the right combination. We were waved through without a hitch. We almost fell down under the weight of our surprise, which is far better than falling under the weight of water.

Even with our good luck, the whole thing is crazy-making. We can’t tell if it’s a left over Soviet-era control mechanism or if they really believe this registration ridiculousness keeps their country safe. Whatever the root cause is, it’s not pro-tourism, and neither is the price of their visa. My visa, on my U.S. passport cost $160, the most expensive visa I’ve ever shelled out money for. Most Europeans pay $75 for theirs, and many need to pay additional fees to get a letter of invitation (LOI) to go to Uzbekistan. The LOI can run another $50-$100 depending on the agency hired to issue the letter, something I would have had to deal with on my Croatian passport.

Since we couldn’t  bunk up in a bed every night, we got pretty cozy in our trusty tent.

We slept under a million stars and stared in awe at the Milky Way. We pitched a tent downwind from one of the many gas refineries, near a pumpkin patch where shepherds took their goats and sheep out for an early morning walk, which scared the beejeezus out me as we broke down our campsite and these silent creatures popped out of nowhere from the darkness.. We hid behind scrappy bushes not far off the road, and were invited in by waiters to camp on teabed platforms after restaurants closed.  A road construction crew let us crash in empty beds at their workers’ camp, and we sometimes dosed off in orchards and on the now-and-again grassy patch.  Like in Tajikistan, a handful of families took us under their wings and gave us a corner of their homes for the night.  And we even managed to sleep on a precarious slope near a water pipe, the only spot we could find as the sun set (the featured photo at the top of this post).

Our worst night of our entire trip to date happened in Uzbekistan, too. We got caught in a big sand storm minutes after getting the mosquito net portion of the tent up. We got pelted with wind and sand as we tried to attach the rain fly, and then had to hold it down with our hands for more than an hour.  I felt like Dorothy in the Wizard of Oz, convinced we would be blown away and land hundreds of miles away in Tashkent, the capital.

When holding the rain fly became unbearable, we packed everything up in the dark and mostly single-handed. With the storm still going, we left  that camp site in search of another refuge, and found one alongside part of a road under construction. We finally nestled down in a small gap between and under some bushes that were big enough for two sleeping bags and little else. The storm broke, and we had a handful of hours of good-enough sleep. Ironically, minutes before our alarms went off at 3 a.m., in the middle of a desert, a couple drops of rain hit our faces. We scurried to get everything back in our bags, and, luckily, the raindrops choked out after a sand storm  lasted only a few seconds.

Because we were walking in cooler hours of the day, we often pitched our tent and took it down in the darkness before dawn and as dusk turned to night. And, because we didn’t know whether the border cops would scruntize our hotel and non-hotel nights and look at all of our photos on every device, we didn’t take many pictures of our campsites. But, here are a few places we found ourselves:

Hiding From the Mid-Day Sun

It was very hot in Uzbekistan when we were there, above 40 degrees Celsius most days (about 105 Fahrenheit). To beat the heat, we would wake up about 3 a.m. and head out around  first light at 4 a.m. We walked until about 10 a.m. and then tried to hide for a few hours, picking up the walk again from about 4 p.m. to  7:30, 8 or 9 p.m., depending on we were calling it quits for the night.

During these brutal mid-day hours, we tried to clock a few hours of nap time. It wasn’t always easy. People like to come around and ask us where are from. And, in some regions, the search for shade turned up empty some days.

But, day rest become a vital necessity, an we napped anywhere we could–at gas stations, behind restaurants, in orchards (one day, with a cow hanging out a couple meters away), in makeshift shelters used by farmers, and at bus stops.

Creativity and inventiveness definitely helped us carve out safe places to sleep this month. But total exhaustion won the final vote.

2 backpackers walking from Asia to Europe