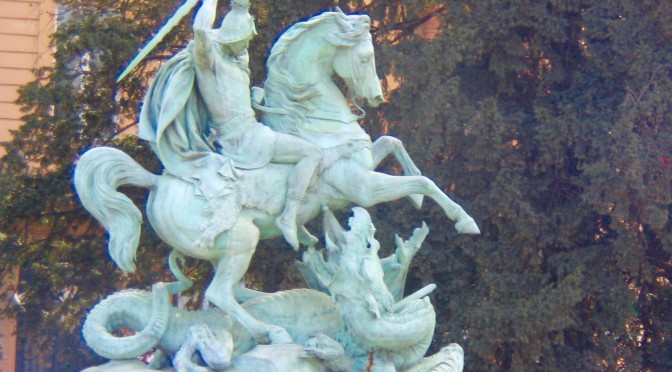 There are things which a man is afraid to tell even to himself, and every decent man has a number of such things stored away in his mind. ~Fyodor Dostoevsky

In our last post, we listed our biggest fears. While some fall into the “very scary” category, a good number of them are unlikely-to-happen, worst-case scenarios. They merit concern and forethought,  but there’s not too much else that can be done about them.

Often , the tougher part is dealing with the “little fears” that show up out of the blue. These are the worries that worm their way into your head, and create a domino effect that can get the best of you and ruin a night’s sleep.

Here’s one of those little things that turned me upside down during our GR 92 walk last summer, and something I’m learning how to work through.

Sniff. Snort. Grunt. Crunch. Double sniff. The snap of a twig. Closer this time. Outside our tent, at least one wild boar has found something interesting. I’m sure there’s more than one animal nearby. It sounds like a group of three.  I’m focused on the one closest to my face, maybe a foot away on the other side of the mosquito net and blue nylon rain fly.

What if he gets closer? I breathe and remember that animals smell fear. I hum the Om Namah Shivaya mantra in my head, invoking Shiva, the Hindu deity known as both the Destroyer and the Benefactor. I ask for protection, safety, strength, grace and benevolence. I mask myself with nature-loving innocence and tell myself how great it is to be outdoors.

In case that doesn’t work, I grab the walking stick besides my sleeping bag. It’s a regular stick I picked up along our 20-day hike, about four feet long. During the darkest hours, it transforms into a magic superhero ninja sword and shaman spell-maker, scaring away the creatures of the night, like bunnies and fanged beasts my imagination invents. We are alone with the boar, camping under an old fig tree, its giant branches sheltering us from the few raindrops of a passing shower earlier in the evening.

I mull over worst-case scenarios and hatch escape plans. The nearby abandoned masia, an old Catalan country house, would offer some refuge if things turn ugly. I could scream or hiss or roar and hope that surprises them. What if this. What if that. All the potentially dangerous situations and my anticipated survival run through my head like a super computer calculating probability statistics. Lluís sleeps heavy, completely unaware that I’m methodically trying to avoid panic and think myself back to a sane reality. I admire his ability to sleep through anything, and curse my light-sleeper tendency. I damn all the boogeymen that have taken many forms and followed me through life from childhood.

I let Lluís sleep, determined to work through the anxiety I’m dreaming up. I turn on my MP3 player and put the volume up, hoping, that even while the music is muted through headphones, the boar and his buddies get the message that the tent is occupied and they should mosey on. I concentrate on a new inner dialog. “This is their home, I’m on their turf. They are curious about what fell off the hiking trial tonight and landed in their backyard. Curiosity killed the cat. Stay on point. No one cares about the cat. Stick with the boar. We have no reason to hurt each other. There is no threat here, we just happened on each other coincidentally. They’re probably disappointed that we didn’t bring enough food to share. Of course, we can be friends and mutually exist in this space on a hillside.”

I string together as many happy boar thoughts as I can in rapid-fire sequence. “I will will them away, and they will go. Mind over matter, and if I don’t mind it won’t matter. Keep telling yourself that, Jenn,” I whisper so that my own ears hear the wish.

Eventually, the sniffing, snorting and dirt crunching moves down the slope. I drift off to sleep, letting go of my formidable stick while my MP3 plays on repeat mode. The sounds of ocean waves block out the things that go bump in the night. My little fears tumble towards shore and dissolve into sea foam.