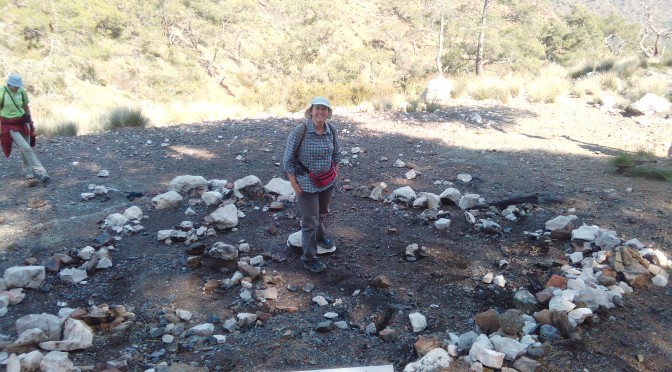 Sitting at Chimera, watching these always-burning fires, my hiking friend and trail angel Elena tells me a Russian fable.

A gaggle of geese were preparing to fly south for the winter. A crow wanted to join them and travel to this faraway place.

“It’s okay. I am power crow,” the crow replies, proud of himself.

The geese set off, and many hours later, find a place to rest for the night. They wait for the crow.

An hour or two later, the crow finally arrives, huffing and puffing.

“Crow, are you okay?” the goose asks.

“Yes, yes. I am power crow,” he says, shaking off his tiredness.

The next day, the geese get ready to leave again. The crow says he wants to continue with them.

“Crow, are you sure? It’s a long, long way,” says the goose, concerned about crow’s ability to fly onwards.

“Yes, yes. I am power crow. I will go with you,” the crow says, convinced that he can make the journey.

Off they go, flying for hours and hours. The geese settle down late in the day and wait for the crow. One, two, three hours pass. No crow.

Finally, late in the evening, he arrives, exhausted.

“Crow, are you okay,” says the worried goose.

“Yes, yes. I am power crow,” the crow says, tired but still with enthusiasm.

The next morning, the crow, again, says he will join the geese.

“I am power crow,” the crow says stubbornly.

They fly and fly and fly. And, the geese, again, finish their day, waiting for and wondering what happened to the crow.

Suddenly the geese hear a big crash. SMACK! The crow slams into the ground, so exhausted he can barely stand up.

“Crow, my goodness, are you okay?!?,” exclaims the goose.

“Yes, yes. I am power crow,” says the crow, trying to cath his breath. “But, you know what? I am also idiot crow.”

Elena and I laugh. I look over at her and say, “I am idiot crow.”

She chuckles. She knows after trekking together for a few days there is truth in my statement. But, still, she believes in me.

“No. No. You are power crow,” she says, throwing her fists up and shaking them victoriously.

4 thoughts on “The Crow and the Geese, a Russian Fable”