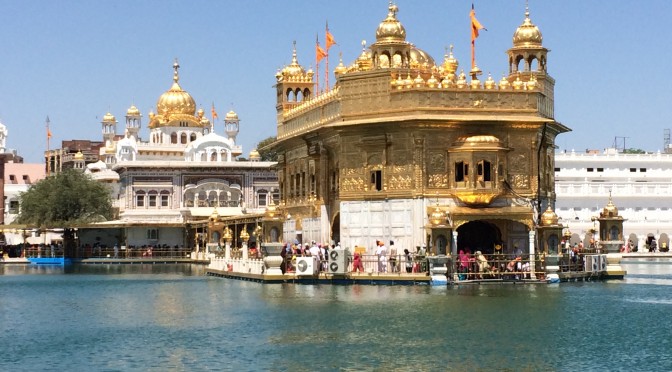 We let our feet soak for a couple of seconds in the cool, shallow pool of water. We step onto the sticky plastic mats, doing our best to ignore the clinking sounds of metal plates being tossed into the wash buckets in the busy community kitchen. We cross the elaborate archway, and stand on the hard marble floor. Our eyes are fixed on our prize: the Golden Temple.

For Sikhs, the Amritsar temple is the equivalent of the Christian’s Rome and the Muslim’s Mecca. Devotees from around the world come to bask in its welcoming glow. For me, this special place marks my official finish line for our walk in India.

Our arrival brings of rush of happiness that is quickly overshadowed by the demolishing impact South Asia has had on us for 6.5 months.

My appreciation for everything we have endured these last few months lasts about two seconds. “Wow! We made it to here. Hello again, sweet Golden Temple,” my satisfied heart quietly tells my head. I send a small thank you to my feet and body. I replay a short reel of vivid memories from our 2013 visit to this incredible spot, and merge them with what my eyes see now .

April 13 is Vaisakhi, the Sikh new year, and is a spring harvest festival for both Sikhs and Hindus. We celebrated our small victory with thousands of others s sitting around the Golden Temple’s water tank.

My spoken words, however, steal my sense of accomplishment.

“I’m done here. You’ll finish soon. And, then let’s get the fuck out of here,” I say to Lluís, overwhelmed by the thousands of people strolling around the large sacred pool in the lead-up to the important Sikh holiday in mid-April. My voice is drowned out by the holy Punjabi words blasting on the loudspeakers.

India, like Bangladesh, has filled me and destroyed me at the same time.

Along the way, people have surprised us with their outpouring of kindness and generosity. They have fed us, sheltered us, helped us when we most needed it and, like in other places, completely humbled us. Talking to locals individually has grounded us, enriched our lives, strengthened our resolve to keep walking, and deepened our connection to this fascinating, incomprehensible country.

We have rested our eyes on beautiful fields of golden wheat and brightly colored temples. We have inhaled the smell of cardamom and ginger tea cooking on wood fires, and savored the sweet liquid passing our lips. We have felt the love of strangers and warmth of their smiles.

But, the constant noise and the horn honking hurting our ears on busy roads, the filth we step over every time we pass through towns and cities, and the sheer mass of more than 1.2 billion people tipping the Earth on its axis have crumbled me. Psychologically, India is on my last nerve.

I’m haunted by a never-ending string of beep- beep-beep beeps. I can no longer watch the maniacal drivers cutting everyone off, nor control the invented flash-images of potential accidents I expect to happen all around me. I want to choke the city touts asking over and over, “Auto rickshaw, ma’am? Need a hotel…I have a cheap room. Ma’am come look at my shoes. Sari for you? I have nice pashminas.” I’m unable to tolerate the unnecessary shoving and pushing and inability to queue to get anything done. I’m disgusted by how people throw their cookie wrappers, broken flip flops, ripped digestive pan and chewing tobacco packets and tiny plastic tea cups wherever they happen to be standing. I’m done scooting around piles of cow poop. I don’t want to hear one more Bollywood song, eat one more plate of dal lentils, or take one more selfie with people who don’t even say hello. Day-to-day life here is exhausting.

Despite my best meditative efforts and the many rewarding personal experiences we have had with so many people, it’s still so hard for me to not be judgmental. I just can’t accept the normal that defines this part of the world. Our many wonderful face-to-face encounters leave us pondering a question we can’t answer: How can they be so nice to us on a one-by-one basis, and be so completely uncivilized and horrible to each other when they collectively gather on roads, in public spaces and around anything resembling an urban hub?

As we sit in the Golden Temple’s shadow and celebrate the fleeting moments of our walking successes, we know it’s not enough to keep us here.

This has been a very long stretch.

Lluís walked about 2,500 kilometers in India; I have done about 1,600. He walked solo 550 kilometers during the two weeks I was meditating in Bangalore and another 350 the week I stayed in Rishikesh as part of my post-surgery recovery. He also did the 30 kilometers between Amritsar and the border town Attari. He likes closing as many gaps as possible on our planned route; I prefer to end countries in places that have historical or cultural importance instead of walking to borders we can’t cross.

The border between India and Pakistan is one such border.

We cannot get a Pakistan tourist visa in India. The embassy in Delhi is issuing only business, diplomatic and official visas. We must return to our country of residency to possibly be granted a tourist visa, we were told by embassy officials.

We knew this would be a very likely scenario. It has been on our minds for a long while, and a piece of advice a friend gave us before we left home rings true. “Good luck with all the decisions you have to make every day.”

The tensions between India and Pakistan forces us now to make a tough choices related to our walk.

We will not fly home to get a visa, a visa that may not be any easier to get in Europe given the current political climate.

It’s a punch in the gut, and we are very disappointed to miss Pakistan (and Afghanistan, another part of our route that was wiped off our plan because of security issues and closed borders with surrounding countries). Even as headlines scream at the world about the problems these countries face, we are sure there are many good people we would have loved meeting. We are sad that we that this choice was mostly taken out of our hands.

Erasing Pakistan off our route comes after another disappointing logistical change.

When we walked into India the end of November, we changed our Plan A to Plan B, suspecting that we would not be able to go to Pakistan from India.

Our initial Plan A for our South Asian leg, shaped in 2015, was to walk from Cox’s Bazar, Bangladesh to a 4,800-meter mountain pass on the Pakistan-Afghanistan border. We wanted to finish India in Amritsar at the Golden Temple, a place we fell in love with in 2013, and cross over into Lahore and head up to Islamabad and Chitral, a place of breath-taking natural beauty, we have been told.

Weighing the idea that Pakistan would be a no-go zone, we created Plan B. We thought we would go to Leh and the Ladakh Valley, walk Himalayan roads to Kargil and finish in Srinagar in Jammu and Kashmir province, which is roughly the same latitude as Islamabad, and thus, close a small gap on our route by going parallel to it. We would take a bus to Amritsar, say goodbye to India, and all would be good in the world. We fell under the spell of a promise of mountains as majestic as those we saw in the Pamirs. For months, the mental picture of snow-capped peaks got us through long, tough walking days when we were jumping off the shoulders to avoid being nicked by buses whizzing by and maneuvering around cows and tuk-tuks.

The universe, however, laughed at our Plan B. “You silly kids. You can’t walk the Himalayas in March or April,” it chided. Mother Nature complied with the greater forces and dumped heavy snowfall in the region in March, which will keep the Manali-Leh road–our anticipated path–closed until mid-June.

And as if to put salt in the wound, trekking experts in Rishikesh told us that the road to Srinagar was under the military’s watchful eye, and that we would likely need special permission from the commanding officer to pass through, which we doubted we would get if we were going by car never mind by foot. Equally bad, the region, tense with geopolitical differences of opinions, is subject to random curfews and fighting among warring factions–situations we don’t want to be caught in the middle of.

It’s hard news to swallow. It’s disappointing, and frustrating. But these are things we have had to carry in the back of our minds since the day we began thinking about this long walk home. Now, when push comes to shove, we’ll back down. The trouble and expense of leaving India to get a new visa when my current non-extendable, six-month one expires and the annoying botheration of registering Lluís with the local police (he has a one-year visa and but has to register after 180 days) to do a few hundred kilometers is not worth it in our subjective and informal pros-vs.-cons risk calculation.

Deciding to stay in India would also cause a domino-effect of other choices and sacrifices. Waiting around in India until the summer and then walking whatever we can before we are stopped somewhere in a region plagued with uncertainty means we will miss potentially good spring, summer and fall weather conditions in other parts of the world we want to walk. Again, the trade-off of sticking around here vs. sucking up the bad news and moving on becomes the deciding factor. We opted to miss the beautiful mountains of India so we could try to walk three more countries this year.

So, that’s how Plan B turned back into our original Plan A. Amritsar, you were always our first choice, and the universe seemed to like that option, too.

Now that we have completed a hair over 7,000 kilometers across Thailand, Burma, the Pamirs, Tajikistan, Uzbekistan, Bangladesh and India and we have accepted that we cannot go to Pakistan, Afghanistan and Turkmenistan (if we were lucky enough to get a visa, it would be a five-day transit visa and we can’t cross 500 kilometers of desert in five days), we will head to West Asia.

Iran, Azerbaijan and Georgia are next on our list, but who knows how all of this will unfold. We are beginning the next round of visa applications, and once again put our fate into the hands of powers beyond our control.

We hope the good vibes surrounding the Golden Temple showers us with a welcoming glow that makes us hard to turn away.

One thought on “India’s done! What’s next?”