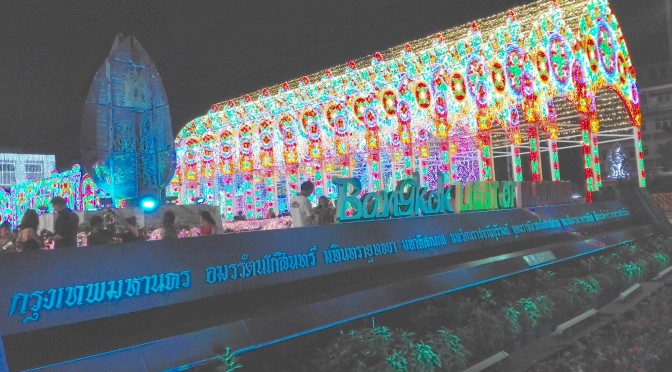 We’re often asked why  we picked Bangkok as our starting point.

It’s a fair question, but we don’t really have a fixed reason why this city and why not some other place. But here are a few things that stick with us:

Our week in review

Here’s what we’ve been doing the last few days since we’ve landed. We got our bahts, found a basic room to crash in and enjoyed our first Thai meals.

We’ve been to a couple embassies collecting visas or gathering visa information for other countries en route. During one of these expeditions, we learned an embassy wasn’t where we were told it was, and a very kind group of people helped us get ourselves sorted and fed us corn on the cob and gave us bottles of water.

We found shade in Lumphini park where a huge Komodo dragon (we think that’s what it was) climbed a tree next to where we were sitting (we were really surprised to see it so close!).

We met Lluís’ friend and his wife and learned a lot about Thailand and Bangkok; thanks to them we learned Bangkok has the longest city name in the world and that there is a pop song about it (You can sing along here with this YouTube video, which oddly enough includes a tango).

And, here a few photos for you.

2 thoughts on “Why Bangkok?”